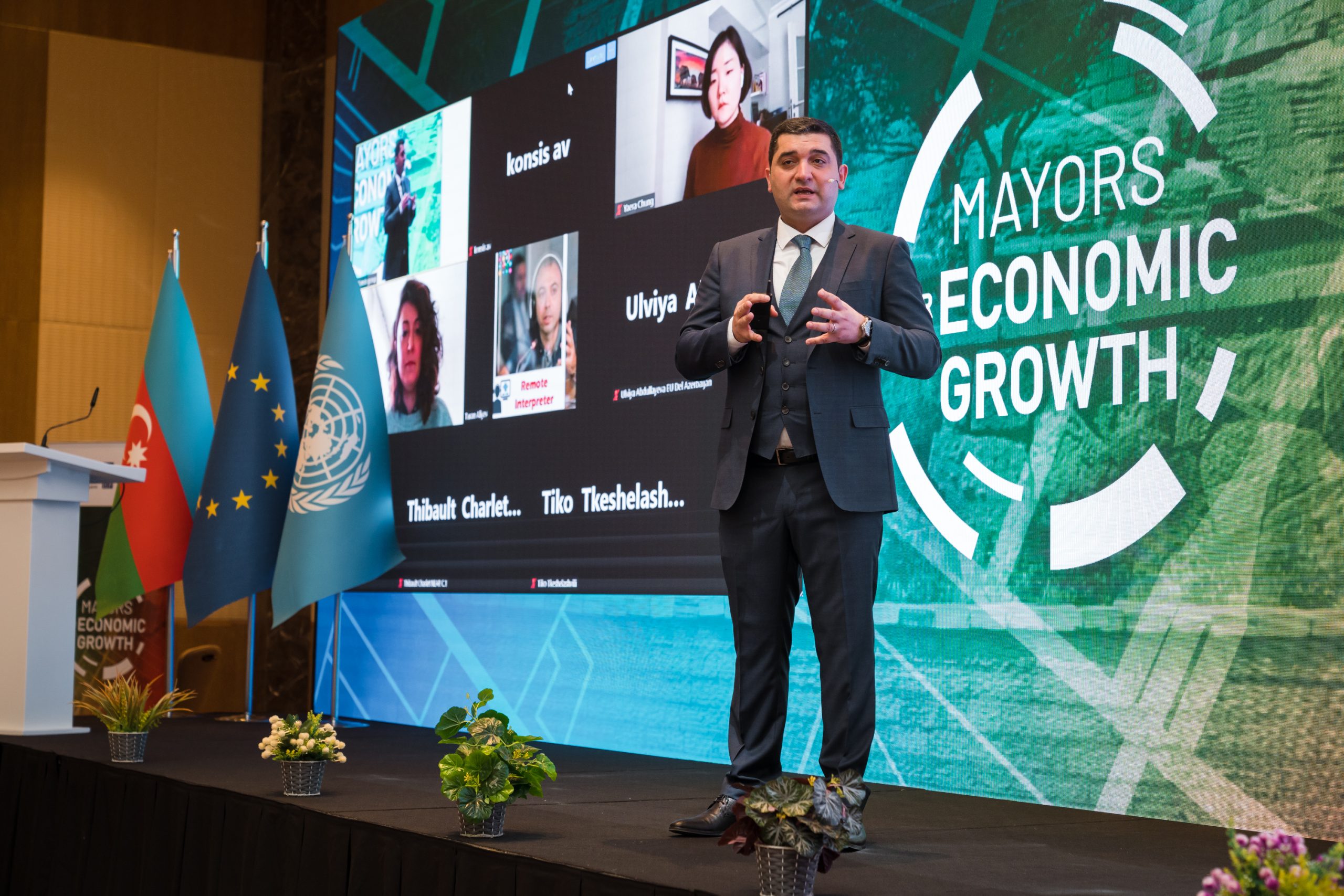 The Mayors for Economic Growth (M4EG) initiative launched by the European Union (EU) is based on the principle that, by working in partnership with the private sector, public organisations and the civil society, local authorities can help improve the local business environment and create the conditions for private sector-led economic growth and employment generation.

Baku, 14 March 2022 – The European Union and the United Nations Development Programme (UNDP) in Azerbaijan have launched the new Mayors for Economic Growth Facility (M4EG). The M4EG Facility will run up to 2024 and aim at sustainable development throughout the Eastern Partnership (EaP) region.

The new Mayors Facility seeks to address challenges met by cities in the EaP region during the pandemic crisis and pronounced beforehand. Working closely with local authorities and communities, the M4EG Facility will explore innovative approaches to development, and practices to serve as a platform to empower municipalities, cities, towns, and rural settlements through learning, exchanges and strategic innovation.

“Under the Mayors for Economic Growth Program, different cities in Azerbaijan will be supported in the process of designing Local Economic Development Plans. Development of cities mean diversified economy and inclusive growth, higher incomes, less poverty, higher living standards, a healthier society and subsequently less disparities between regions and the capital city. There is no doubt that this Program will contribute to the further development of the “strong partnership” between the EU and the Government of Azerbaijan and most importantly the mayors of the cities”, said Peter Michalko, European Union Ambassador to Azerbaijan.

“Cities play an important role in the economy of Europe and Central Asia countries and the pandemic has most recently surfaced their vulnerability, the need for heightened resilience and is likely to have a long-term impact on structural aspects, spatial distribution and organization of cities. These complex challenges require new models and modes of thinking, that rely on understanding the complexity and a continuous process of exploration, and bold goals. Today we embark on a new journey with our strategic partner, the European Union, to support city municipalities of Azerbaijan to develop and implement their plans that will benefit their communities in the years to come”, said UNDP Officer-in-Charge to Azerbaijan, Sukhrob Khojimatov.

Both current and future members of the M4EG will benefit from training and knowledge exchange activities focused on the developing of innovative growth strategies that are highly contextualized and built on local ecosystems. The EU and UNDP will support them in developing a new generation of local economic development plans, promoting strategic thinking, and building urban resilience. Local authorities will have access to new capabilities and funding, including the Annual Portfolio Call for Interests and Annual Innovation Call for Proposals.

The Mayors for Economic Growth Facility is part of the M4EG initiative, launched and funded by the European Union since 2017. The M4EG Facility is run by UNDP, starting from 2021, in close cooperation with the EU, the local authorities, and a range of other partners.

“Thank you for visiting the new M4EG website. The Armenian language version is under construction. We are working to make your journey more convenient.”