The European Union provides EUR 1.8 million for Crisis Response and Renewal in Ukraine and the Republic of Moldova 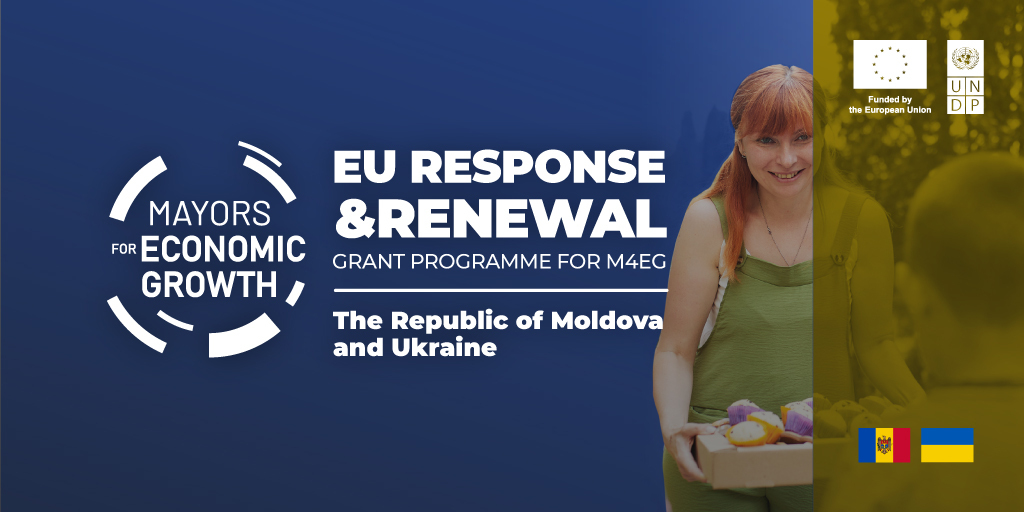 A financial top-up under the auspices of the Mayors for Economic Growth Facility supports the crisis immediate response and recovery & long-term renewal of Moldovan and Ukrainian local authorities, including support to Ukrainian refugees and those displaced by the war, throughout 2022-2023.

Brussels, Chișinău, Kyiv, 30 November 2022 – The European Commission announced today a new financial agreement of EUR 1.8 million to enhance direct support to city and town authorities that are members of the Mayors for Economic Growth (M4EG) Facility network in Ukraine and the Republic of Moldova (Moldova). Seventy percent of the grant component will be available for Ukrainian local authorities, and 30 percent to local authorities in Moldova.The additional funds, along with previously repurposed funds from the M4EG project will sponsor a Call for Local Demonstration Initiatives focusing on revitalizing and supporting the recovery of local economies and communities impacted by the war.

The structure of the fund will have two aspects:

“The European family stands together with Moldovan and Ukrainian municipalities. With the outbreak of the Russian invasion of Ukraine, affected municipalities showed great resilience and courage in the face of war,” said Gérald Audaz, Team Leader, Economic Development and Digital Transition in Eastern Partnership countries, DG NEAR. “This is why we keep mobilising support – to strengthen local authorities who are now dealing with complex challenges, striving to re-start a local economy by addressing the immediate needs in the city on the ground.”

“For the last nine months, we have witnessed how the ongoing war led to significant loss of life, devastating destruction of infrastructure, and unprecedented internal displacement in Ukraine and towards neighbouring countries,” said Lejla Sadiku, Innovation team leader, UNDP Istanbul Regional Hub. “City authorities are at the forefront of the conflict and its complex effects. Direct support will help address immediate needs and re-think and re-start local economic development trajectories.”

As of February 2022, the M4EG initiative in Ukraine carried out several interventions to support cities, equipping IDP shelters in Lviv, supporting a crisis coordination centre in Melitopol, setting up a network of 34 United Nations Community Volunteers in 29 local authorities, and launching an online course on crisis management and the integration of internally displaced persons for local authorities.

In Moldova, a rapid light assessment of M4EG signatories provided a snapshot of their level of readiness for emergency response and recovery. Emergency support such as equipment and assets to improve living and sanitation conditions for refugees was delivered in 14 local authorities. The EU Delegation and UNDP confirmed their support in establishing a Response and Coordination Unit under the Congress of Local Authorities of Moldova (CALM) to strengthen crisis management capabilities.

Municipalities interested in participating in the Call for Local Demonstration Initiatives should be part of the M4EG network. To join the network, Moldovan and Ukrainian municipalities should reach out to M4EG Secretariat in respective countries through the following link.

The M4EG Facility draws on the Mayors for Economic Growth Initiative, launched and funded by the European Union (EU) in 2017. Since 2021, the EU-funded M4EG Facility has been managed by UNDP in close cooperation with the EU, local authorities and a range of partners.

For the European Commission/DG NEAR:

“Thank you for visiting the new M4EG website. The Armenian language version is under construction. We are working to make your journey more convenient.”